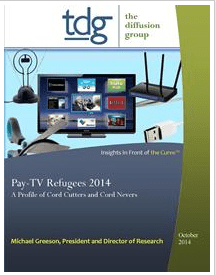 A new report from The Diffusion Group, “Pay-TV Refugees, 2014” finds that about 14% of broadband subscribers don’t have a traditional pay-TV service.  That’s up from 9% in 2011 and reflects the steadily increasing popularity of direct-to-consumer streaming video services.  TDG predicts that residential broadband subscriptions, which now account for 75% of US households, will surpass the number of residential pay-TV subscriptions before the end of the year. 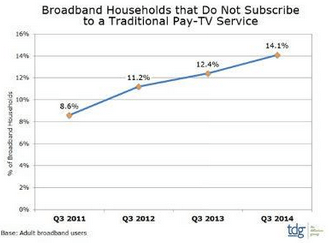 The trend provides “an excellent opportunity for new video purveyors, whether pure-play online ventures like Netflix or the growing list of television networks going direct to the consumer,” noted Michael Greeson, TDG President and author of the report in a statement accompanying the study.  HBO has already announced its intent to launch a direct-to-consumer initiative as has Starz.

The TDG study was based on a survey of 2000 adult broadband users over four years with the most recent survey being conducted in September, 2014.  You can learn more about the study and the TDG profile of Cord Cutters and Cord Nevers here.