The IVA Release Calendar provides a quick overview of all release “events” for any title in our Theatrical, Home Video, Games, and TV database. Visit it regularly to find out when new titles are scheduled to come out for the media you are interested in. Then use IVA’s Title Tracker to receive updates whenever there is new video and/or information about the title. (Click here for more information on Title Tracker.)

The menu across the top displays the four media categories for which IVA offers trailers: Theatrical, Home Video, Games, TV. The calendar on the left lets you view titles by month and year. Additionally you can choose to show only release events for a specific country. All titles not yet released are displayed in order of release date for each month. Title listings include basic information about the program including rating, genre, and principal cast. Click on the blue ” Track” button next to any title to begin receiving Title Tracker emails whenever there are new videos or images for that title. Click the “Remove” button to stop Title Tracker alerts for any title. 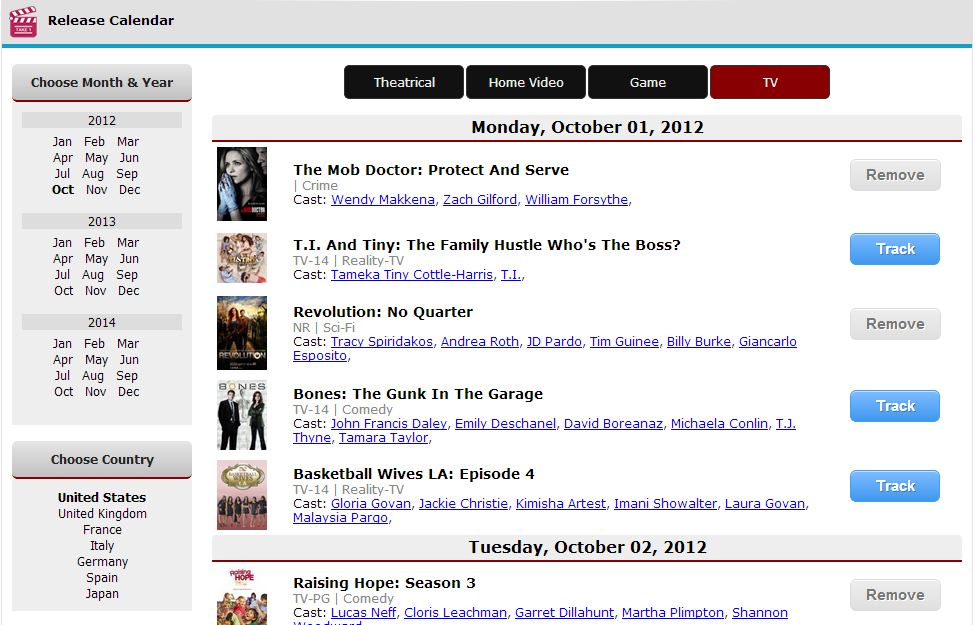 About Release Events: Media Manager treats any new availability of an entertainment program as a ‘Release event”. The Theatrical Release Calendar includes two types of releases: Limited and Wide. Wide release means that a title is showing in all major US theaters. Some titles may initially be released in a limited number of theaters usually followed by showings in more theaters at a later date. Occasionally a new title stays in limited release. We also incude titles originally in wide release that are re-released in a limited number of theaters. For example: “Wake in Fright” was released in 1971 and was re-released in New York and LA in October 2012.

Limited releases are denoted with the “Limited” icon next to the title as shown above.